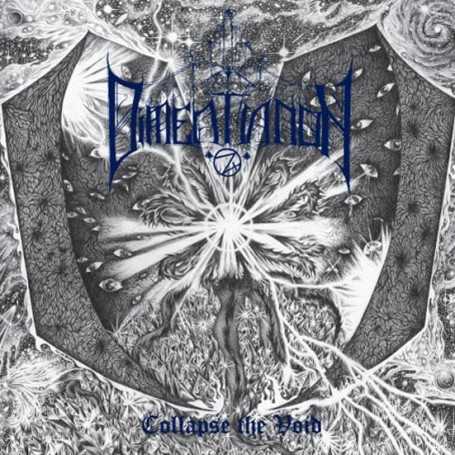 Limited to 250 copies on black vinyl with 12"x12" insert. With their 2010 recording entitled “Collapse the Void,” Dimentianon delivered their best work to date. Notwithstanding the fact that Dimentianon have been recording superb music for that past decade, very little is spoken about this band. This vinyl edition of “Collapse the Void” will hopefully draw them well-deserved attention. Dimentianon, like perhaps most contemporary extreme metal bands, straddle the line between Black and Death metal. In contrast to the primitive and raw sound that has become the norm for most Black/Death, Dimentianon, on the other hand, play highly technical and well-recorded music more akin to Death Metal, but cover it with a veneer of Black Metal. There are few bands to which Dimentianon may be compared, but a band like Bloody Sign may provide a guidepost by which Dimentianon’s sound can be assessed. The five songs on this mLP are captivating as Dimentianon demonstrate their unique ability cover vast territory within a single track. Thematically, Dimentianon focus on the existential bleakness of the universe. Indeed, the band even includes the following quote by Carl Sagan alongside the lyrics: “The universe seems neither benign nor hostile, merely indifferent.” This nihilistic sensibility with a view toward man’s insignificance against the vast limitless expanse of the sky above permeates the sound and imagery of this release. To accentuate this motif, Dimentianon inject their music with hints of prog and even include the song “Fragmented Nostalgia” which draws on sounds utilized by 1970’s pioneers such as Tangerine Dream and Klaus Schulze. The result is an impeccably executed mLP that is as complex, diverse, and conceptually rich as you will find in the current stream of underground metal releases.